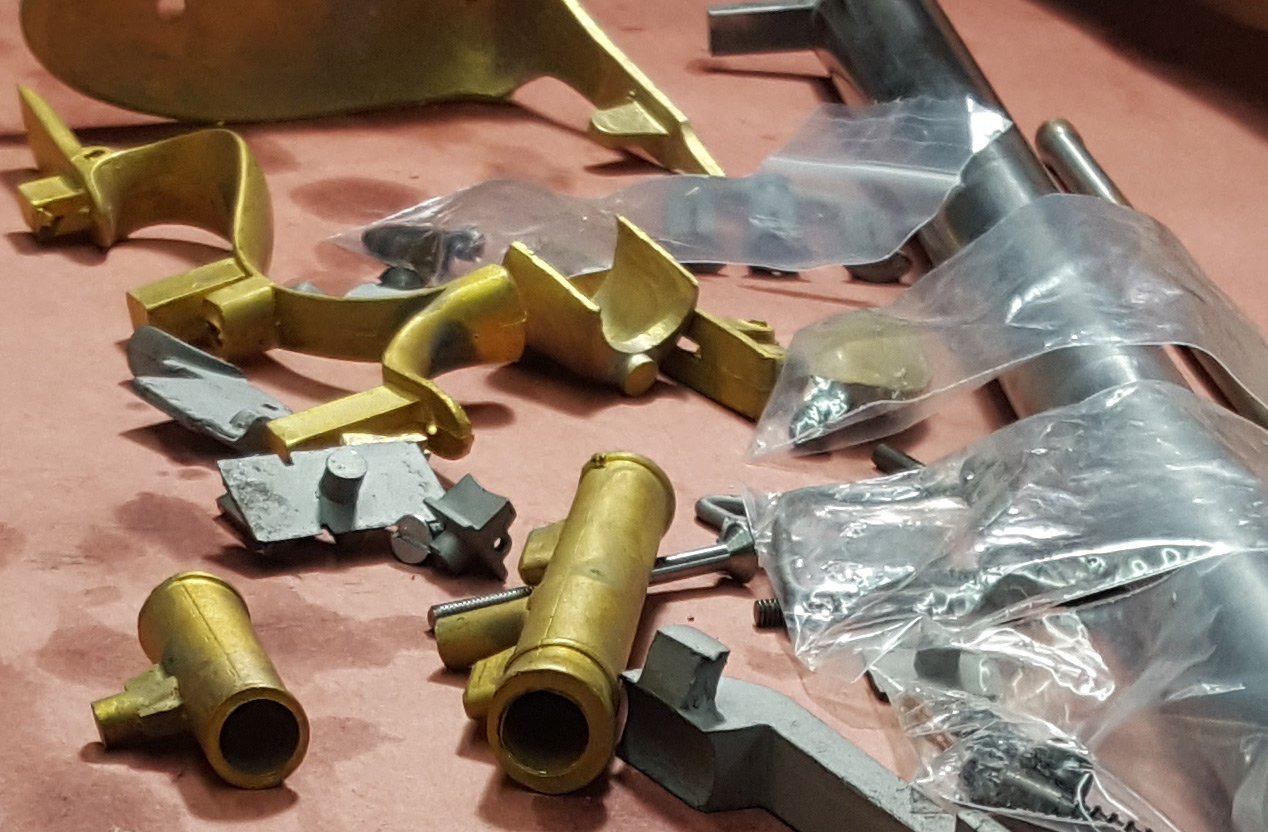 This isn’t going to be so much about building the Baker rifle as it will be about building from a “kit”.   Now, when I say “kit” most people are going to think something that any Jane or Joe can slam together in the basement in a couple days. That’s exactly what you were thinking, weren’t you?

So lets start out with the varieties of “kits” there are out there for the person who wants to build their own long rifle, muzzle loader – what have you.

Mass produced kits
These are your kit guns by companies like Pedersoli, Traditions, CVA etc. Mass produced and designed for mass production. Historical accuracy will generally be sacrificed in some areas to bring production time and cost down.  These kits; conflicting with what I wrote in the previous paragraph, CAN be slammed together in a day or two,  require very few tools and only modest wood working expertise. These kits are an excellent choice for someone just starting (gun building) and/or on a budget who just wants a decent gun you can hunt, plink or target shoot with,

Jim Kibler
Jim deserves special mention here as his kits (at the time of writing are relatively new) not only use parts of the highest quality, designed and produced in-house,  are historically accurate, and are also manufactured on a modest scale using CNC.  This approach yields a kit that can be put together rapidly with a modest array of tools, metal and wood working skills. Still appropriate for someone’s first kit, the cost will be considerably more than a mass produced kit but you are going to wind up with a pretty spectacular rifle.  https://www.jimkibler.net/

Builders Supply House Kits
Pretty much all of the US builders supply houses offer “kits”.  These kits are more accurately a collection of rough castings, locks, barrels and pre-carved stocks, generally without diagrams or instructions.  Castings in brass, steel, iron and/or German silver will need casting gates removed, holes located and drilled, rough casting marks and imperfections filed off, then, final polishing and finishing. Barrels will need tooling marks removed, dovetails for sights and lugs located and cut, sights and lugs installed, touch holes/vent liners drilled, tapped and installed then browning, bluing, aging or “in the white” finish.. Triggers and locks will need casting marks removed, moving parts fit and tuned, located in the stock, then drilled and tapped. The stock itself can vary widely as to what needs to be done to it depending on how it was made and where it came from.
You are going to need time (40 to 100 hours or so), both metal and wood working skills a decent set of tools and some gun making know-how to complete one of these.  The cost will be considerably more than a mass produced kit, but you have the opportunity to make something unique and personalized.
I strongly recommend anyone considering one of these kits to spend a bit of extra time and read one of the fine gun building books available (from the supply houses)  I have had more than several of these kits dropped off on my doorstep for completion by someone who got in a little over their head.

Since that discussion is now out of the way, lets get started with The Rifle Shoppe Baker Kit. If you haven’t guessed yet, The Rifle Shoppe is a builder’s supply who has done quite a bit of research and development on their Baker rifle offering.  Rather than reiterate all that here, I’ll just provide the link: The Rifle Shoppe

The kit had been sent to me by someone who decided it was a little beyond their ability to complete. I had seen a Baker Rifle before (on TV – Sharpe’s Rifles) but really didn’t know much about them nor any clue just how much more involved it would be when compared to an American Longrifle. My first thought after opening the box was:

In that box was:

Luckily there was also a full scale diagram with some printed information and annotations on it (the "instructions"), so I was actually able to figure out what all the bit’s and pieces were and roughly where they went!

Lets’ start with the castings, other than there being a lot of them, mostly brass they seem pretty much as expected from a supply house,  maybe a little on the rough and heavy side, difficult to tell if they are sand or investment cast but the Baker is a military rifle so heavy parts equals “marine proof” is probably accurate.  For the most part I have no real complaints, other than the breech plug needing to be replaced (it was undersized) though I might replace the barrel keys.  The castings will take a little more work to clean up than usual, but it’s not a deal killer.

The barrel is a featureless tapered tube around 28” long, it will need to be crowned, have the breech plug installed, six (might be seven?) dovetails cut, under-lugs, sights and sling lug installed as well as the bayonet lug, which will need to be either brazed or silver soldered to the barrel.
Now; I mentioned “featureless” – right?  well that is going to mean some interesting layout, measurement and marking on that “featureless tapered tube” to get all the sights and lugs positions located and lined up correctly.  You are going to want a couple 123 blocks, V-blocks a surface gauge, a height gauge would be better, and a big pot of Dykem. Interestingly enough another person saw one of my instagram posts about this project, he had just bought the same kit and had The Rifle Shoppe do all the barrel work. Probably a good investment if you have never cut a dove tail in a tapered cylinder before!
So the barrel is going to be a lot of tricky work, but you can also have it done for you.

The stock also appears to be what I would expect from a pre-carved stock, looks like a fairly nice piece of Walnut, all the inlets have been at least partially done and look pretty clean, the barrel channel is slightly under size (good) and very clean, however; this stock was definitely carved on a router pantograph (duplicator). I have yet to see a pre-carved stock that was not done on CNC that didn’t have issues needing addressing.  Though first look, if there are issues they are not immediately apparent and there looks to be enough extra material there if things do need some tweaking.

I don't know, nor did I stop to ask or even take five minutes to check the website to see who made the lock.  Looks very nice, it’s fast and sparks very well. When I get to the installation & tuning, I’ll find out where it came from.

So that was what was in the box.  Everything looks good, pretty much as expected, a little more work that I was bargaining on but should build out to a nice rifle.  Just the stock itself feels very handy and shoulders quite nicely! Though that ram rod is certainly an odd looking thing – can’t be cheap to make either.

Next article I’ll start on the step-by-step build.